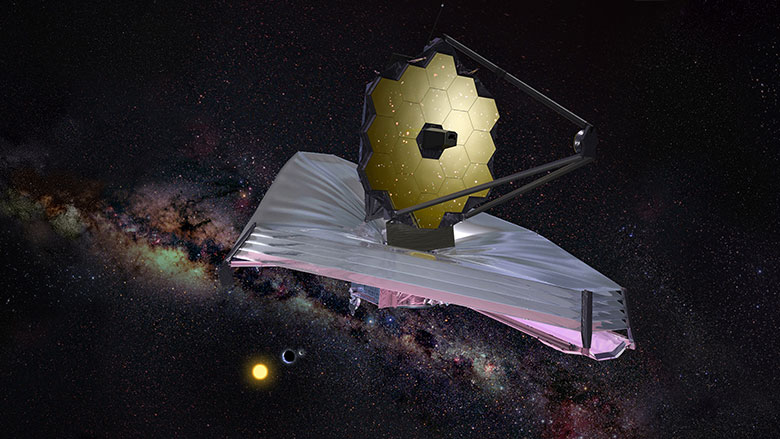 AURA collects James Webb Space Telescope (JWST) documentation on this site as a service to our community, and provides the material on an “as-is” basis.

The development of the observatory is managed by the NASA Goddard Space Flight Center, and the main industrial partner is Northrop Grumman. The Science and Operations Center for JWST is the Space Telescope Science Institute (STScI) in Baltimore, Maryland. STScI brings together the scientific community to enable and maximize the science of JWST. Its staff is responsible for the development of the ground system for JWST, which includes flight operations, as well as the software the astronomical community needs to plan and execute JWST observations, and to analyze the data it produces. STScI is also responsible for hosting the JWST data in the Mikulski Archive for Space Telescopes (MAST).
Get more details about the James Webb Space Telescope →

Karen Kaplan (06-27-2018) If NASA can overcome human error and other problems, its James Webb Space Telescope may finally launch in 2021 Los Angeles Times

House Science Committee Chairman Lamar Smith (R-TX)
“The James Webb Space Telescope has tremendous potential to expand our knowledge of our solar system and our universe. Program delays and cost overruns don’t just delay the JWST’s critical work, but they also harm other valuable NASA missions, which may be delayed, defunded, or discarded entirely. The Science, Space, and Technology Committee is looking forward to analyzing today’s report in depth as we work to ensure accountability and efficiency in the JWST project. We’ll be holding a hearing to address this report next month. Our witnesses will include NASA Administrator James Bridenstine, Tom Young of the JWST Independent Review Board, and Northrup Grumman’s CEO Wes Bush – the primary contractor on this project. I expect to see progress on keeping projects on budget and on time.”

Senate Commerce Committee Ranking Member Nelson (D-FL)
“While I am deeply disappointed by what has come to light over the last several months, I believe the discoveries we will get from the James Webb Space Telescope will be worth the cost of completing the mission – which is what the Independent Review Team recommended. Imagine if we had chosen not to continue the Hubble Space Telescope after its problems were discovered? But we also need to do some soul-searching to find out how to better manage large, complex and ambitious programs in the future.”

Interview with NASA Administrator Bridenstine: (07-13-2018) Roll Call
Q. NASA is relying on contractors to build a new deep space vehicle, the Space Launch System, two commercial crew vehicles to replace the space shuttle to take our astronauts to the International Space Station, and an ambitious new telescope, the James Webb. But these projects are behind schedule and over budget. It worries House Science Committee Chairman Lamar Smith. Is there a contract administration problem at NASA?

A. Lamar Smith is right: There is a challenge here that we have to wrap our arms around and figure out how to fix. What I would tell you, when you think about the Space Launch System, which is the largest rocket ever built, it’s going to give us transformational capabilities that are necessary to get to Mars. No. 2, the James Webb Space Telescope, we’re going to go over $8 billion on that program and that means I have to go back to Congress, in front of Chairman Smith, and I have to ask for a reauthorization. I think that’s the right thing to do. Congress needs to 100 percent buy in on this.